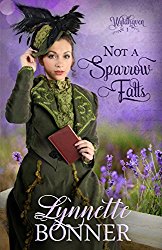 Schoolteacher Charlotte Brindle is relieved that her long journey from Boston to Wyldhaven is about to come to an end. And then the bullets start flying! As she sprawls on the floor of the coach and curls her arms around her head, she wonders whatever in the world possessed her to give up the civility of a Boston school for the promise of adventure on the wild frontier?!

Her fellow passenger, an elderly man named Patrick Waddell, has obviously angered the men outside. And he has no intentions of going down without a fight—or without a bargaining chip!

Sheriff Reagan Callahan grinds his teeth in frustration when Patrick Waddell emerges from the coach with the tiny slip of a schoolteacher as his hostage. Reagan’s perfectly planned-out capture has just been shot to smithereens. What had the town’s founder been thinking when he hired a woman like her? A petite and prim woman was not the kind of teacher Wyldhaven needed. He should be back at his desk drinking coffee! Instead, he now has to mount a rescue!

Take the next stagecoach to Wyldhaven,
where the coffee’s perked hot,
the sheriff likes his apple pie fresh from the oven,
and adventure invariably waits just around the next river bend.

After a second failed relationship, Charlotte believes the school teacher’s position in Wyldhaven is the answer to her prayers. Once she arrived, though, she experienced second thoughts…

“This certainly couldn’t have been the leading of the Lord, could it?”

The sheriff was the perfect hero for Charlotte, even though initially she blamed him for…well, you’ll just have to read the book! I will say that this story tugged me right in, and one particular scene reminded me of a Mary Connealy book.

With some laugh-out-loud moments and just as many “oh, no!” situations, the fast-paced plot and the snappy dialog kept me turning pages, but it was more than that. So many facets to appreciate about this book…the other potential romantic entanglements, a few deep faith questions, and the depth and complexity of the secondary characters, especially Liora and Dixie. I can’t wait to read Dixie’s story in On Eagles’ Wings (next in line), and I hope (hint, hint, Lynnette! Can you please write faster?? lol) we’ll finally learn more about the infamous Liora as well.

With a setting similar to Hope Valley, fans of When Calls the Heart (waving to my fellow #hearties!) will enjoy this book. Just plan to set aside an entire afternoon because you really will not want to put it down!

To Ponder:  After you pray for direction and God opens a door, do you second-guess where God leads you? How do you experience peace about whether you’re following God’s will for your life?

I won an ebook of Not A Sparrow Falls. Other than the free book, I was in no way compensated and this review is my fair and unbiased opinion.

Saddle up for romance and adventure with the Wilde sisters!Shannon Wilde is the middle sister–and the one who loves animals. She’s established her own homestead and is raising sheep for their wool. Things are going fine…until Shannon gets swept over a cliff by Matthew Tucker!Tucker seizes every opportunity to get away from civilization, but one particular walk in the woods ends with him sprinting away from an angry grizzly and plunging into a raging river, accidentally taking Shannon Wilde with him. Their adventure in the wilderness results in the solitary mountain man finding himself hitched to a young woman with a passel of relatives, a homestead, and a flock of sheep to care for.As Tucker and Shannon learn to live with each other, strange things begin to happen on Shannon’s land. Someone clearly wants to drive her off, but whoever it is apparently didn’t count on Tucker. Trying to scare Matthew Tucker just makes him mad–and trying to hurt the woman he’s falling in love with sets off something even he never expected.

Sharing my takeaway ~
I just love Connealy’s kick-em-in-the-teeth, explosive, laugh-out-loud openings scenes! They never fail to yank me right into the story. By the end of the first chapter, my palms are sweaty and hubby’s asking what is so funny. Now & Forever was no different.

Circumstances led Shannon and Tucker to an abrupt wedding shortly into the book, but the romance didn’t stop there. No, it progressed until the very last page, sweet, funny and oh-so-tender. There was never any doubt about their love for each other. They had plenty of obstacles, though, to keep me turning pages.

Nightmares plague Shannon and at one point she questions where God was during the war. Tucker’s faith is steadfast and sure, and I like how he responded without judgment, by suggesting that she bring her doubts to God and not to hide them, that God’s big enough to handle our doubts.

I thought Tried & True, the first book in the Wild at Heart series featuring Kylie and Aaron, might’ve been my favorite Connealy book, but I was wrong. Now & Forever took its place, but that seems to happen with every one of her books. Both books can be read as stand alone, but trust me and just start with the first one. You won’t be sorry! Contemporary and historical romance readers alike will enjoy Now & Forever. Set aside a few hours to read it, though, because you won’t be able to put it down!

Disclaimer: Sending a big thanks to NetGalley and Baker Publishing Group/Bethany House Publishers for the privilege of reviewing Now & Forever. I was provided a free copy of the book in exchange for my fair and unbiased review.

Kylie Wilde is the youngest sister–and the most civilized. Her older sisters might be happy dressing in trousers and posing as men, but Kylie has grown her hair long and wears skirts every chance she gets. It’s a risk–they are homesteading using the special exemptions they earned serving in the Civil War as “boys”–but Kylie plans to make the most of the years before she can sell her property and return to the luxuries of life back East.
Local land agent Aaron Masterson is fascinated with Kylie from the moment her long hair falls from her cap. But now that he knows her secret, can he in good conscience defraud the U.S. government? And when someone tries to force Kylie off her land, does he have any hope of convincing her that marrying him and settling on the frontier is the better option for her future?

Civil War veteran Kylie is tired of keeping up the charade of dressing as a man, part of her pa’s crazy scheme to honor her late brother’s memory. The youngest of three sisters, Kylie’s determined to fulfill the three remaining years left to homestead, then she plans to sell her place to her pa and move closer to civilization. But when land agent Aaron Masterson rescues her from a near fatal accident and discovers the woman underneath the britches, he refuses to keep her secret.
Aaron Masterson left for the war thinking his family was safe at home. When he returned and found them all dead and hatred destroying what was left of his neighborhood, he heads west to start a new life in Aspen Ridge, leaving his idyllic childhood home behind, along with a best friend who’d served on the opposite side of the war and who blamed him for his family’s deaths.
Romance between Aaron and Kylie blossoms quickly, and I enjoyed the flirty banter.

Fast reading suspense is balanced with trademark humorous scenes, and Tried & True also tackles some tough topics like: What lengths will we go to please our parents? Loving and praying for our enemies…

“There might be places in the Bible that men can debate,” Kylie said. “Places hard to understand, and folks differ on the meaning. But not when it comes to hate. It isn’t allowed. ‘Love your enemies. Pray for those who persecute you.”

Tried & True might be one of my favorite Connealy books! I’m not sure which sister’s story will be next, but I can’t wait to read it!
Disclaimer: Sending a big thank you to Bethany House Publishers and NetGalley for allowing me the privilege of reviewing Tried & True and for the free copy I received in exchange for my fair and unbiased review. This opinion is my own, and I received no compensation.