Not participating in NaNoWriMo next month? Perhaps you’d consider taking an online course? Seekerville offers night classes in the Village…last one for 2014! 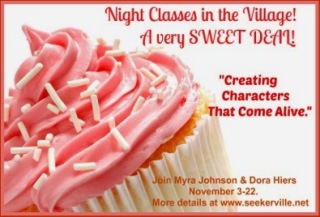 Writers, do your characters fall flat on the page? Want to make them come alive for your readers? Authors Myra Johnson and Dora Hiers will offer tips to create memorable characters that stay fresh in reader’s minds long after the last page is turned. Check out these Charlotte Mecklenburg Library locations for a program near you:

About the book~
Crippled both physically and emotionally by his war injuries, First Lt. Gilbert Ballard struggles to find himself again in civilian life. After breaking his engagement to Annemarie Kendall, he has found solace in the arms of Mary McClarney, a spunky Irish immigrant nurse he met at the Army and Navy Hospital in Hot Springs, Arkansas. Yet Mary’s love for Gilbert goes unreturned.

If it’s not Gilbert’s insane jealousy over his former fiancée’s new marriage, it’s his addiction to pain killers and gambling that thwarts Gil’s own happiness. Worse, Gilbert’s mother, Evelyn, continually reminds him of what he lost when he pushed Annemarie away. Under Evelyn’s critical eye, Mary fights to believe in her worth, wondering if she will ever be enough.

As Mary longs for the day when Gilbert will finally let go of the past and learn to love her as she loves him, she realizes that the only way to open Gilbert’s heart is to whisper her goodbyes . . . and pray God will bring them back together.

Sharing my review~
After being introduced to both Gilbert and Mary in When the Clouds Roll By, the first book in Myra Johnson’s Till We Meet Again series, I couldn’t wait to get my greedy hands on the second book, Whisper Goodbye. Wounded war veteran First Lt. Gilbert Ballard was a character I couldn’t forget after finishing When the Clouds Roll By. He’d treated his former fiancee and best friend dreadfully, but it was so hard to be upset with him. He was a casualty of war, broken and bitter, floundering without purpose, minus a leg, and nursing a morphine addiction for constant pain. See what I mean?

If he could drive far enough, fast enough, he might outpace the unrelenting emptiness that had haunted him since the war. ~Gilbert

Without the morphine, sweet Mary’s soothing touch was the only way to relieve the blinding phantom pain cursing his missing leg, but Mary soon tires of Gilbert’s obsession with his ex-fiancee and refuses to be second choice. Toss in Gilbert’s mother, Mrs. Ballard, who reinforces Mary’s sense of unworthiness, and you have one unhappy heroine. When it seems like Mary and Gilbert will never find their happy place, Gilbert finally acknowledges that he can’t mend his broken spirit on his own and determines to win Mary’s affections with a job and hard work, but even that came at a cost. I appreciate how each of the characters had to find their own way, to their faith and to each other.

With a sweet secondary romance to savor, characters you can’t help but cheer for, and nuggets of historical tidbits tucked inside, Whisper Goodbye is sure to please historical and contemporary readers alike. Another 5-star worthy book by Myra Johnson!

I’m looking forward to reading the third book in the series, Every Tear A Memory, starring Gilbert’s brother, Thomas. If you missed my review of When the Clouds Roll By, you can read it here, but trust me when I say you’ll definitely want to read these books in order. 🙂

Disclaimer: Sending a big thanks to Myra Johnson and Abingdon Press for sending me an advance review copy of this book in exchange for my fair and unbiased opinion. This review is my opinion, and I received no compensation.