Rena–a choice, a tragedy, and life-altering consequences. Cody–a loss so devastating he questions, “Where is God?” Can the two overcome a past riddled with hurt and distrust to open their hearts to hope…and love?

A choice, a tragedy, and life-altering consequences…
When Rena Dunigan flees New York City and her dream of becoming a Broadway performer, she returns to her hometown of Knoxville harboring a life-altering secret and the shame of a shattered past. When her friend, Kelsie, talks her into helping build a house through the local Shelter the Homeless program, she meets Cody and his mischievous Saint Bernard, Sammy. Cody is dealing with a devastating loss of his own, yet his gentleness and patience melt Rena’s resolve to never trust–or love–again. But what will Cody think when he learns the consequences of Rena’s past?  And can Cody begin to hope–and to trust–that love can bind and heal their hurting hearts?
Here’s a sneak peek into Light the Fire:
“Where’s the party?” Rena asked. “This place looks like a war zone with no survivors.” Empty concrete bags and torn nail boxes littered the muddy ground.
“Kyle’s working with the others over there.”
At the far side of the concrete-block foundation, Kyle lifted a two-by-four into place, but it was the guy hammering beside him that caused Rena’s breath to catch. Dark, unruly hair kissed broad shoulders. The thin fabric of his navy T-shirt strained over a terrain of muscles as he struck each nail neatly into place with a single, confident blow.
Rena tore her gaze away. She’d seen enough guys like him in New York City—handsome guys convinced they were a gift to every woman within a five-hundred mile radius—when all they really excelled at was breaking hearts.
Rena tightened the tool belt around her hips and strode toward the two-by-four frame, ready to drive a nail. Suddenly the thunderous crash of a stampede filled the air, and she was tackled by what felt like a runaway freight train. She flew airborne, then slammed to the ground. A finale of fireworks exploded in her head.
“Sammy, no. Bad dog. Sit!” Footsteps pounded as someone sprinted over gravel and leaped pallets of brick.
Stunned, Rena shook her head to clear the fireworks and came face to face with a massive, drooling dog. Jowls drew to expose spiked teeth; he loomed as if he intended to devour her for breakfast.
Her cries ripped the air. “Help! Kelsie!”
“It’s OK.” A husky voice slid over her like warm molasses as the guy who’d been helping Kyle dropped to his knees beside her. She breathed the clean, woodsy scent of his aftershave.  “It’s just Sammy. He’s harmless.”
“Yeah, right.” Rena dipped her head and shielded her face with the collar of her windbreaker as the dog nudged his meaty snout in her tangled hair. “Just get him away from me.”
“Sammy, no.” He gave the dog’s collar a yank. “Bad dog. Sit. Stay.”
“That’s not a dog. It’s a bear.” Rena scooted through damp grass to put distance between them. As if to mock her, Sammy followed. He sniffed her hair, and then lazily licked her face, leaving a trail of warm, sloppy saliva across one cheek.
“Yuck, I’ve been slimed.” She swiped a forearm across the gooey moisture and tilted her head to stare into the most soulful pair of doggy eyes she’d ever seen. “What’s your name, big boy?”
“My name’s Cody.”
A giggle erupted, and she covered her mouth. “I meant the dog.”
“Oh, right. Meet Sammy.” Cody offered a hand. Calluses mingled with the warmth that brushed her palm. She sat up cross-legged, brushing hair from her eyes while she waited for the dizziness to pass. “He’s a Saint Bernard who thinks he’s a toy poodle. He forgets he weighs as much as a truck.”
She let go of Cody’s hand. “Haven’t you heard of obedience school?”
“For me or the dog?”
“Maybe you should check into a buy-one-get-one-free program.”
Light the Fire by Mary Manners is available through White Rose Publishing. http://www.whiterosepublishing.com/Light-The-Fire-Softcover-Edition
About Mary Manners: 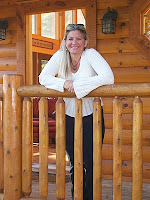 I live in the beautiful foothills of East Tennessee with my husband, Tim, our daughter, Danni, and the cherished cats we’ve rescued from local animal shelters…Lucky and Gus.
I enjoy the outdoors, and am looking forward to warm spring weather.  I love cultivating flowers, taking long walks with my wonderful husband, and reading romance novels while lying in our hammock beneath century-old shade trees.

11 thoughts on “Light the Fire by Mary Manners”