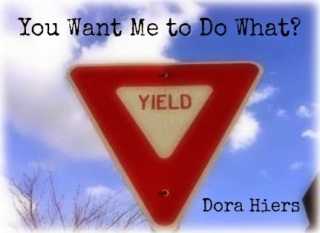 We’re outta here! With their bags packed and camels loaded, the Jewish remnant of Judah planned to flee to Egypt. They’d had enough.

Ishmael had just slaughtered Gedaliah, the king’s appointed governor, and filled an entire cistern with dead bodies. Not only did the remnant fear Ishmael’s return, but they also worried about the king’s reaction to Gedaliah’s murder. Not that they had killed him, but back then they didn’t have Twitter or Facebook to spread the word.

The survivors begged Jeremiah for a word from the Lord. What should they do? Where should they go?    “Whether it is favorable or unfavorable, we will obey the Lord our God…” ~Jeremiah 42:6 NIV

Jeremiah relayed the Lord’s instructions:   “Stay here in this land. If you do, I will bless you, and no one will harm you.” ~Jeremiah 42:10 TLB

Say what? You want us to stay? They’d just witnessed horrific killings, and the Lord was telling them to stay, that no one would harm them? Outraged, they accused Jeremiah of siding with the Babylonians and departed for Egypt ~ against the Lord’s wishes.

Ouch. Hadn’t they just said they’d obey whether the news was favorable or unfavorable? At first, their flagrant disobedience blew my mind, but the longer I dwelled on it, I realized that whether it’s disobedience or ungratefulness, He views all sin the same. When God reveals His path and it doesn’t line up with my plans, isn’t my reaction usually disbelief or displeasure rather than gratitude?

Case in point: my quest for an agent. My publisher doesn’t require an agent to submit, and since their contracts are fairly straightforward, I didn’t feel the need for one early on. Eleven books and four years later, I would welcome career guidance and appreciate help navigating the ever-evolving publishing industry. So after prayer and research, last year I submitted my Harmon Heritage series to two well-known CBA agents, and both declined representation. OK. So God obviously didn’t want me partnering with them, but I didn’t perceive their rejections as a STOP sign, rather as a YIELD. I kept praying about my writing journey. Feeling a definite nudge to venture into unknown territory, I wrote Roping the Cowboy, my first book targeted for the mainstream market, and queried two more agents who represent both markets. Again, two more rejections. This time, I pouted. Yes, I admit. I pouted, and it wasn’t a pretty sight.

“Whether it is favorable or unfavorable, we will obey the Lord our God…” and “Stay here in this land. If you do, I will bless you, and no one will harm you.” The first convicts me; the second confuses. If I’m praying for God to direct my path, shouldn’t I be happy when He responds with either a RED or GREEN light? Sometimes I wonder if the nudge to write stories lacking a distinct faith element, but still sprinkled with grace and hope, was truly from Him. Or had I mistaken His voice for my own?

I’m being completely transparent for a couple reasons. Let me just put it out there. First, I confess that I still struggle with discerning God’s will for my life and my writing. I can’t be the only one, right?

Secondly, if you’re another writer, to encourage you that even published authors still receive rejections both from agents and publishers, and they still sting like a slap in the face. Not only that, but things start to wear a writer down. Lukewarm or negative reviews, no real down time because you’re responding to emails and facebook posts or working on a galley when you’re supposed to be on vacation, and the royalty statements that don’t quite match the effort and time you’ve invested. Sometimes I wonder if it’s worth it, if I shouldn’t just let it all go…

But it doesn’t let go of me. Because when I hit that pothole of discouragement, God rains down blessings. It may be a sweet friend who listens to me rant over coffee, a glowing review, an invitation to present a workshop because of a referral, or just hearing about someone else’s problems and realizing mine pale in comparison. Sometimes, He plants another idea in my head and characters who yearn for their story to be heard, their hurts to heal, who crave forgiveness or who long for a second chance at love. Other times, He grants me a stellar word count day with peace that overflows from my heart and spills onto the page.

So, I’m still tooling down the road until God plants a ROAD BLOCK in front of me.
What about you? Has the Lord revealed a different path recently than the one you expected to take? How did you respond?
The prudent see danger and take refuge, but the simple keep going and pay the penalty. ~Prov 22:3 NIV
You reign, Lord, in every aspect of my life. Take my hand and lead me where You’d have me go. Obliterate my fears and doubts. Fill my spirit with peace as only You can do. Amen.

9 thoughts on “You Want Me To Do What? by Dora Hiers”